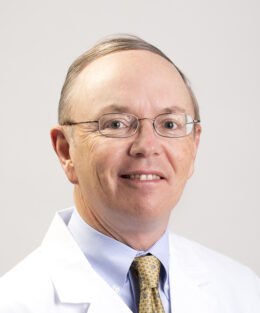 Dr. David A. Johnson is a board-certified, fellowship-trained gastroenterologist. He takes an evidence-based approach to patient care, making recommendations with the best chance of optimal outcomes. He is dedicated to engaging in shared decision making with the patient. Dr. Johnson has particular interest in the following conditions and procedures:

Dr. Johnson is professor of medicine and chief of gastroenterology at Eastern Virginia Medical School in Norfolk. Despite his primary focus on the clinical practice of GI, he has published extensively in the internal medicine and gastroenterology literature, contributing over 600 articles, book chapters, invited reviews, and abstracts in peer-reviewed journals. He has also edited or co-edited seven books. He is currently the co-primary investigator of a VA Catalyst grant to study microbial effects on GERD.

After completing his undergraduate degree at the University of Virginia, Dr. Johnson earned his medical degree from the Medical College of Virginia. He completed an internship at the Naval Hospital, Portsmouth, VA, where he was a medical officer on the USS Sylvania, followed by residency training at the Naval Regional Medical Center in Portsmouth. He completed his gastroenterology fellowship at the National Naval Medical Center in Bethesda, MD.

He is a past president of the American College of Gastroenterology. He co-founded the National Medicare Carrier Advisory Committee, which he co-chaired for 10 years. He has served on numerous screening task forces and guidelines development committees and has co-authored 17 national GI screening guidelines and ongoing national guideline publications.

Dr. Johnson served on the American Board of Internal Medicine (ABIM) (Gastroenterology) Board of Examiners and was reappointed to the Maintenance of Certification ABIM board. He is the past co-editor of Reviews in Gastroenterological Disorders and section editor for the American Journal of Gastroenterology, among many other appointments. He directed the first published study in the world on the colonoscopy for colon cancer screening (1988). Additionally, he was the physician who worked with Virginia State Senator Emily Couric to put through the historic first legislation to mandate colorectal cancer screening with colonoscopy as the preferred standard.